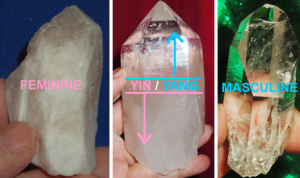 Why do cloudy crystals turn clear?

What is the cloudy stuff? Tiny air bubbles and sometimes moisture that is trapped in the crystal when it grew. It is called Fairy Frost.

Fairy Frost looks like “fog” or “clouds” wisping inside the body of the crystal. This is the “stuff” that is fading to clear upon wearing or after lots of active use of the crystal (meditation, energy work), etc.

This week we’re going to talk about a question that I get a lot. I decided to make a short blog post out of the answer to help.

Here is the question:

“Hi, I have a question that no one seems to be able to answer.

I have had a few inexpensive beautiful crystals that are cloudy when I first get them then after I wear them close to my body for a bit, like a month or so. They then go clearer and the flash in them really shines.

I have asked around and no one seems to be able to help me know what it is that is happening.

A few examples are clear quartz, auralite 23, moonstone, and labradorite. I have been told it must be the oils from my hand that make it appear shiny or that it’s my imagination, and they haven’t even seen the crystals.

Any insight is very appreciated. Thank You in advance.” – S 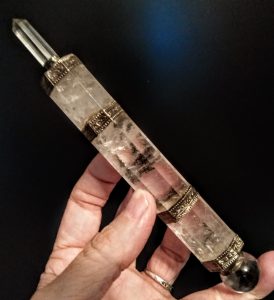 Thanks for reaching out!

I have heard of this happening a lot, (why cloudy crystals turn clear) and I have seen it in my own crystals.

Caveat, my experience is with quartz. I can only speak definitively to the clear quartz stones.

However, I think we can safely apply the same logic to the colored stones like the labradorite, moonstone etc.

Back to the question of why cloudy crystals go clear.

I have had this crystal wand for about 10 years (see image). When I first got it, it was very dense with frost. It is much more clear now, even though I don’t use it often.

It lives in my bedroom near and with a lot of other crystals, and I look at it often, so it has probably been running energy for me.

Why Does It Happen 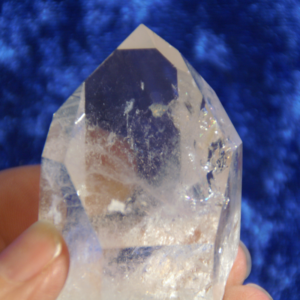 There is something about running energy through crystal that can clear them up.

Running energy might happen during meditation or active healing work. It can also happen when you wear them close to your body.

I am not a geologist and don’t know the mechanism of HOW this happens in a structural sense, but it DOES happen. It is not your imagination.

In my mind, I see the energy inside the crystal ramping up, the atoms and molecules becoming excited. As this occurs, it clears or diminishes the appearance of the Fairy Frost, leaving the crystal more clear and the energy more direct.

It shows you are running energy through your crystals and they are responding and changing in response.

My Hypothesis on The Changes in Non-Quartz Crystals

To apply the same logic to your non-quartz gemstones: the “fairy frost” inside clears up, making the adularescence (shiny flashes) inside appear clearer and brighter.

I disagree that it is the oils on your hands doing it.

That might be a tiny bit of the reason but certainly not all of the reason. I think it is an internal/structural thing.

I hope this discussion of why cloudy crystals turn clear helps!

You might find that your crystals become more clear or more frosty inside. Now that you know it is possible, start watching them for change!

If you have questions, feel free to leave them in the comments.

Tagged how to. Bookmark the permalink.