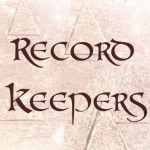 Record Keepers (also called Recorders) are special surface features found on some crystals. They aren’t super rare but they aren’t common, either. I remember when I first started learning about crystals and sorting them for the website, the crystals I had found nearly ALL had Record Keepers on them. Dozens and Dozens. I thought, man, Record Keepers must be a very common thing! So if a crystal had Record Keepers and also any other configuration →

Last time we talked about Keys and Imprints. There are other ways that triangles and squares may present on crystals. We’ll discuss those here, namely Growth Interference and Record Keepers. Indentations and markings similar to Imprints and Keys also occur but they fall into a different category. Some of these triangular and square-shaped impressions are caused by what is called Growth Interference. Growth Interference happens when another mineral grows during the development of the crystal and →