Crystal Genn » CRYSTAL HOW-TO » RAINBOWS IN CRYSTALS – IS THERE A “SPIRIT KEEPER”?

RAINBOWS IN CRYSTALS – IS THERE A “SPIRIT KEEPER”?

WHAT ABOUT THE CONCEPT OF A “SPIRIT KEEPER” IN CRYSTAL? 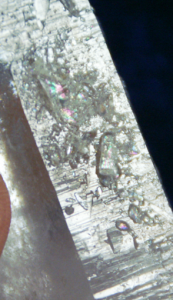 The “Spirit Keeper” description of rainbows in crystals seemed to imply that there is an individual guardian of the crystal. There is a guardian of sorts – but not in such a direct, literal way which our mind as humans might visualize. To me a Keeper seems to imply a entity other than the one being “kept”.

As an example, I describe myself as a “keeper” of the crystals, simply while they are here, waiting for transport to their new homes. I chose the name “keeper” rather than “owner” or “business owner”, because “owner” implies that the crystals are mine, and I OWN them. Rather, I see myself keeping them safe while they are on their journey (hence the name, keeper).

But I digress. Back to the saying of Rainbows in crystals being a gift from the “Spirit Keeper of the crystal”. You see, comparing my title of keeper to the concept of a Spirit Keeper implies that there is an entity other than the crystalline consciousness giving you a gift by allowing you to see the Rainbow (which belongs to the crystal).

So, while I liked the saying because it is so poetic and concise, I didn’t take the part about the “Keeper” 100% literally. Like I said, when I read it, it seemed to me that the author was saying that there was a Spirit Keeper (other than the crystalline entity) “keeping” the crystal (and the crystalline entity). That part didn’t resonate with me.

HERE IS HOW VENUS PUT IT 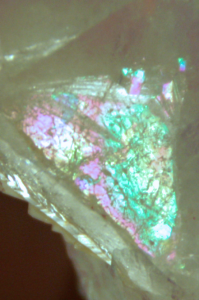 As I mentioned in the other post, my crystal guide, Venus, piped in to add something which explains the concept I was trying to convey and it is off this interjection that we will expand and flesh out. 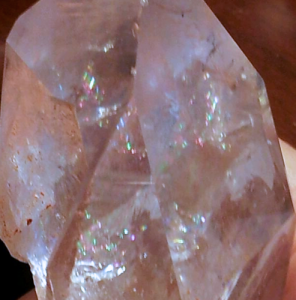 In the above explanation, Venus describes that the body (crystal) is separable from the energy (crystalline consciousness). While they are together, they are also separable.

Because we are living in a 3-D reality, on the Earth plane, it is mostly true (with some exception, obviously) that the physical body for the soul or consciousness is required to optimally interact PHYSICALLY within the physical surrounding environment.

It is the same with crystals. The stone (the crystal “body”) is required for the crystalline energy/consciousness (crystal “soul”) to more easily (tangibly) interact PHYSICALLY with the physical surrounding environment. In this example of interacting physically, I am referring to interacting with the physicality of humans.

I am stressing the word physically, because as we know, our souls or our discarnate energies can and do influence the energetic (and sometimes physical) portions of the environment, and the same (and more-so) is true for our Crystal Friends.

However, it is true that the interaction with the physical environment is easier with a physical body as a vehicle.

It is certainly true that the majority of humans interact more easily with something tangible to make the link between physical and etheric. The stone crystal is just this tangible “body” housing the crystalline energy.

So in that way, the Spirit Keeper is explained as the crystalline consciousness within the crystal stone.

I know that seemed like a long way to go to explain the gift of Rainbows in crystals being  from the “Spirit Keeper” of the crystal! However, it is an important distinction that the crystal and the crystalline consciousness are separable.

It is part of the reason that we need to periodically interact with our crystal friends, to let them know we are paying attention and appreciate their energy and input.

If you are like me, you might have quite a few crystals in your house. There is always increased energy and a portion of the crystalline energy present, but they are not always 100% engaged unless we show that we are engaged as well.

Do I mean that they pout and “take their marbles and go home” if we aren’t playing with them? Not at all! They are absolutely joyous in their coming and going, and have no judgement about whether we are paying them enough attention. However they have big work to do and the more we interact with them, the more they interact with us. It is always a co-creative endeavor.

As an aside, look at the little Rainbow person in this crystal from my archives which I adopted out years ago (maybe it’s a Rainbow representation of the “Spirit Keeper”).

MORE ON THE CONCEPT OF THE CRYSTALLINE CONSCIOUSNESS 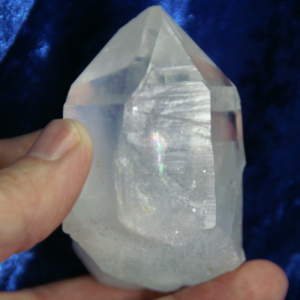 What does that mean, exactly?

My crystal guide Venus has explained it to me in this way: All crystal comes from and is connected to (and through) what she calls The One… My understanding is that The One is a crystalline energy that is the Source of all crystalline energy (maybe it is the source of ALL, as in EVERYTHING). I’m not sure. But I imagine it would be comparable to God or Spirit (All That Is) but different.

Whatever The One is exactly, since the crystals or crystalline energy is connected through it, all crystals share the same innate abilities.

Like the crystalline energies I have spoken about before, (regarding The One)… they (the crystalline consciousness) are mostly both on and off-planet.

When I first started learning about crystal, I imagined that an individual crystal when buried in the earth had nothing to do but wait or work from that small point of reference. This thought was in error, however. The crystalline energies aren’t stuck inside a physical crystal deep in the earth forever until they are brought out into the light (any more than the information of the world wide web isn’t trapped in our smart phone). They come and go, they inhabit and do their work and they go back and forth from in the earth to out, and in the crystal to out. They are vibrating, healing, shining, spreading light from deep within the earth as well as from outside.

It does feel like a bit of a gift when you turn the crystal just right and are awarded with the surprise of a Rainbow winking back at you.

If you haven’t before, check your crystals in bright light. It is possible there is a gift of a Rainbow in there waiting for you to find it!