I recently had a question about Lemurian Seed Crystals and felt it would make a good blog post. We will return to the alphabetical review (Curved crystals) later.

Without further ado, here is part of the conversation I had, with the questions paraphrased to fit the format and expounding on the concept both from me and Venus:

WHAT ARE LEMURIAN SEED CRYSTALS? 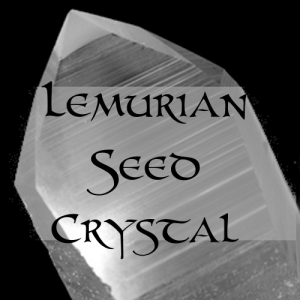 QUESTION: Though I have read quite a bit on the internet about Lemurian crystals, there is much yet to understand. As for Lemurians, legend states that some have been embedded with knowledge.

ANSWER: That’s correct. I am finding a lot of things [we] know about crystals are based on legend (both spoken and remembered), and some of those legends have taken new life and expanded into myth due to [our] current misunderstanding of how things work.

I feel Venus (my Crystal Guide) here with me right now, so much of this information is coming from her, through my filter (the sentence in italics above being the first). I will continue, letting Venus take over the keyboard and for clarity, I will put Venus’ explanations in italics.

Again, the question was: Though I have read quite a bit on the internet about Lemurian crystals, there is much yet to understand. As for Lemurian Seed Crystals, legend states that some have been embedded with knowledge.

Venus: That being said, (that much is based on legend and even myth) yes, the knowledge is, in a sense, what you call ‘embedded’. But as Genn has discovered with our explanations, it isn’t that the knowledge is “burned” onto (or rather into) the crystal, like your CD’s or storage devices. Rather it is made accessible through these crystals, much as one would utilize a portal.

As we have stated before, each crystal has the ability to do what every other crystal can do, but the light (or energy) is… how should we put it… tweaked… in a certain way through the different shapes and configurations which you have named (Lemurian, Bridge, Barnacle, etc).

These shapes and namings simply help you in your 3D construct to work more easily with us.

However, there is no one crystal type better suited or less suited for a particular “job”. We are chosen simply by how we might help you in your current dimensional construct.

BY WHO’S AUTHORITY ARE WE FOLLOWING THE MYTHOS OF SEEDED LEMURIAN CRYSTALS? 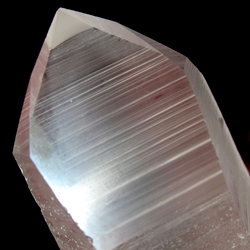 QUESTION(S): How have we learned and who has qualified what is currently written to date, about their energy?

Much is written about their healing potential. Who has determined this and by what method?

Who has identified different energies between one crystal and another, based on their markings?

Who can tell me the origin and story behind this legend and what method has been used to determine their healing qualities?

ANSWER: All good questions, and none with adequately complete answers.

The writings have come from people who have worked with us over time, each defining their personal experience.

Also, over time, the experience solidified enough that the person felt confident in writing down “this is what I have consistently received when I do xyz”… and as the shorthand of sharing occurs, it becomes “THIS IS WHAT EVERYONE RECEIVES WITH XYZ”… and finally “XYZ always means THIS”.

This is a dangerous practice. It is not dangerous as in harmful or physically detrimental. But it is dangerous in that these postulates have become the shorthand for what IS. Do you follow?

While it IS what these certain people have experienced and recounted, it ISN’T the whole picture and it is ALWAYS (and rightfully so) run through the filter of the person having the experience.

When the writings are shared, the people reading view it as… gospel… rather than as suggestions or shared experiences.

It is important to keep your mind open to new possibilities and information. 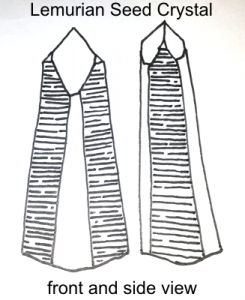 So, what I have understood from Venus over the years, is that a lot of what we know about crystals is just really the most rudimentary, very beginning stages.

This is because (through no fault of our own) our fundamental understanding of even basic physics and how our world works is behind, even completely backwards in some cases.

For example, go back to the time when we believed the world was flat or that the earth was the center of the Universe and everything revolved around US. In the grand scheme of things, that time hasn’t been that long ago!

Sadly, we are still operating under mistaken and misunderstood concepts and ideas which in the future will seem just as ludicrous to people then as the examples mentioned above seem to us today.

We are simply using what we know about the Universe (keeping in mind much of what we know is mistaken or misunderstood) to try to make new concepts that we are learning (square pegs) fit into the current paradigm (round holes).

What I have come to understand is that MANY MANY crystals were “seeded” by both Atlantis and Lemuria, in crystal “farms” if you will. They were placed in the best areas for optimal growth and energetically tended. Therefore, technically speaking, many (if not most) crystals could technically be called “seeded Lemurian crystals”. TECHNICALLY speaking.

However, what we now have is a specific TYPE of crystal which we have all agreed to call “Lemurian Seed Crystals”.

As a reminder, these are crystals with a specific formation (three heavily stepped, laddered or striated sides), which are often Laser Wands (though not always), and which usually have clarity and a specific strong energy.

Because of the ‘shorthand of sharing’ as Venus put it, the term Lemurian Seed Crystal has come to mean to most people that 1.) only these certain and specific types of quartz crystals are are imbued with this special Lemurian energy/information and 2.) they are the only type of quartz crystals which have special information encoded from Lemuria… And that simply is not the case.

SO THEN, ALL CRYSTALS ARE THE SAME AND HAVE THE SAME ENERGY?

That being said, not all quartz crystal has the same energy. It IS a truth that crystals from different regions of the globe have identifiable and different energy.

It is also true that even right here in Arkansas a crystal from one mine will have a different energy than a crystal from another, just down the road. I have experienced this myself.

I think there is a difference in the feel of a crystal that was “seeded and farmed” versus crystals occurring naturally due simply to mineralogical and chemical properties present.

It stands to reason that the areas where there are significantly large deposits of quartz crystal (such as those found in Arkansas and Brazil for example) are probably areas which were seeded and tended.

Also, to clarify, I believe this seeding and tending was done energetically, via the mind, not physically as we typically think of as “gardening”.

Therefore it also stands to reason that if people were tending these “crystal gardens” that the energy with which they were infused would be naturally amplified and enhanced by the crystalline energies. And also, that the people charged with tending these sacred beds of crystals would be of impeccable and high vibrational energies themselves.

Following are the primary reasons I think people find the unique and different energies in Lemurian Seed Crystals.

Furthermore, with our current understanding, we believed that since we were receiving information from ancient times  that somehow the information was placed into these crystals for safe keeping like a CD or disc drive.

When in truth, many many crystals have been previously seeded and meticulously tended, so will also have the access to that focused attention from the ancients, and the information is accessible via portal-like energies, not as static storage devices.

ARE THERE (WHAT WE CALL) LEMURIAN SEED CRYSTALS IN ARKANSAS OR ARE THEY ONLY FROM A CERTAIN PLACE IN BRAZIL?

There are (what we are currently calling) “Lemurian” crystals (by definition: three heavily lineated sides, etc) found in Arkansas and many other places around the world.

When I began my learning of the different crystal shapes and types, I understood what I read to mean that Lemurian Seed Crystals were found only in a particular area in Brazil, and were only Laser Wands, etc.

My guess is that when they were first “discovered” this is the area from which they came, so it stood to reason that people thought that was the only place they were to be found. I am finding this not to be the case.

Initially, when I first heard about Lemurian Seed Crystals, in my mind (and probably in many other’s minds), the crystals were infused with this special knowledge or information packets and then were “placed” in the Earth by ancient Lemurians, (like hiding Easter eggs) for us to “find” when we were ready or evolved enough.

Instead, I am finding that the vast majority of the quartz crystals with which we are currently working are also seeded crystals.

In that light, they all have the same potential to connect us to our ancient past, whether or not they have the shape and description of what we are now calling Lemurian Seed Crystals.

I do think it is true that we are learning about and gaining more access to crystals now, since we are becoming ready for the information (that previously seeded beds of crystals are now being accessed because it is “time” for that to happen).

However, I don’t think, like Easter eggs, that there were just certain crystals imbued with specific information placed for us to find when the time was right.

I think what most people know of or attribute to “seeded Lemurian crystals” actually applies to many more quartz crystals than just the ones with that specific shape or configuration. I would  say it applies to nearly ALL quartz crystals.

It most certainly and especially applies to crystals which spent time being cared for, with focused attention, tended and nurtured in these crystalline beds. In this light, I also now understand that many crystals have been “seeded”, not only the ones we call Seed Crystals (or Lemurian Seed Crystals).

I view these special crystals (any seeded and tended crystal) as access points and living guides to connect us to the Lemurians and the ideology of that time with wisdom to help guide us into the New Earth’s ascension. 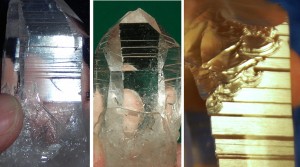 The difference with Lemurian Seed Crystals shape is that through the heavily Lineated sides, we can access this special knowledge more easily in our 3D construct using the physical reminder of the stepped sides.

See the blog post on Lineated Sides to discover how to work with unzipping crystals to receive further knowledge.

I hope this blog post has helped flesh out and expand your current knowledge and understanding of Lemurian Seed Crystals.