Last time we talked about Keys and Imprints. There are other ways that triangles and squares may present on crystals. We’ll discuss those here, namely Growth Interference and Record Keepers.

Indentations and markings similar to Imprints and Keys also occur but they fall into a different category. Some of these triangular and square-shaped impressions are caused by what is called Growth Interference. Growth Interference happens when another mineral grows during the development of the crystal and then subsequently disappears.

As well as the square and triangle, more often than not, it looks like a buzz saw was taken to the crystal. Sometimes there is a little bit of mineral left in part of the crevasses.

Some Growth Interference presents in square shapes and not in the typical buzz-saw fashion.

The crystal to the right has lots and lots of square-edged indentations. Remember the example I gave of pressing a shape into clay when imagining how Keys and Imprints were formed in the last post? Imagine taking that piece of clay and a Lego, (“let go of my leggo!” wait… what??) and stick them all over the crystal. In this instance, though, you don’t pull the Lego out, you leave it there. Imagine that over time, as the crystal grows, the Lego disintegrates or melts or falls out on its own accord due to changing temperatures or other variations in circumstance. The crystal is left with characteristic indentations, and that is called Growth Interference.

The photo on the left has large, very deep squares, the one above has smaller squares. Both of these examples are on the side of a point but they also might occur on the base, for instance on a cluster.

Remember that the difference between Growth Interference and Keys or Imprints is that in Growth interference there used to be another mineral in those spaces (not another crystal).

Moving from Growth interference and onto surface features in triangle shapes, other triangles you might find are called Record Keepers (sometimes called Recorders). 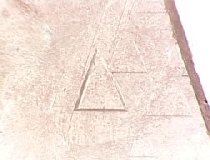 It is said that a Record Keeper crystal will find its way to the person who needs the information it contains. They contain special wisdom. I don’t know how that works exactly, but I also don’t know how a CD can hold a sentence much less a whole encyclopedia. Suffice it to say that they represent storage devices and that the information was placed there by someone, perhaps in Atlantis or Lemuria.

Sometimes they are tiny, sometimes larger, there may be just one or dozens. Typically they occur just on the faces or facets of crystals, not on the sides. Lots of times Gas Phantoms have them in the Etching which is characteristic to them. Below, on the left, is a picture of Trigonic Record Keepers on a Gas Phantom point, to the right, a rather large traditional Trigonic Record Keeper. 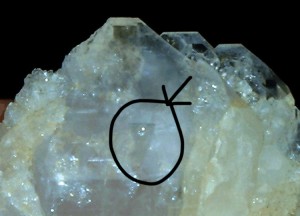 Trigonic Record Keepers are crystals of transition. They are good for soul retrieval and can work as a key to the future. They have an interesting and unique energy. I think they feel like a traditional Record Keeper on steroids.

The energy of a traditional Record Keeper is one of a quiet exciting knowledge or information held within the crystal itself. Trigonic Record Keepers feel more like a doorway to endless information.

To access the knowledge in either of these crystals takes time and patience. Sometimes the Record Keeper markings appear and disappear. To me, they hold a magical, exciting energy.
This is a lot of information. Here is a recap:
GROWTH INTERFERENCE

I know this can be confusing at first, so I hope I have shined a little light onto this subject for you. If you happen upon crystals like these, either Growth Interference, Record Keepers or Trigonic Record Keepers, consider yourself blessed! They are rare, special and have tremendous potential and exciting energy.