Crystal Genn » CRYSTALS » Orgonite: What is it?

Orgonite: What is it? 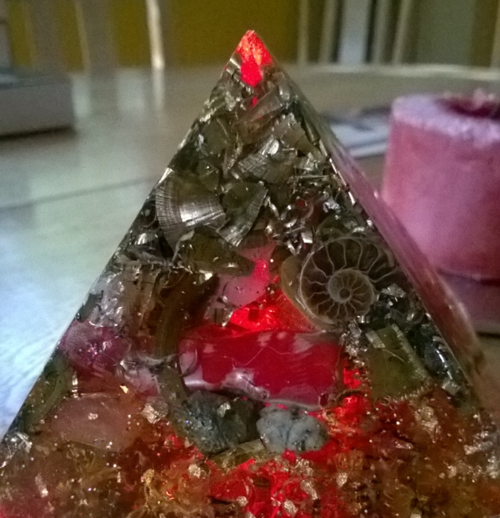 The subject of this post is Orgone and Orgonite. Although I have never studied it, the subject of Orgonite has been in my working vocabulary for years. I’ve been sending crystals out all over the world for making devices such as Orgonite, Orgone Generators, Cloud Busters, Orgone Accumulators and Holy Hand-grenades (to name just a few). I’ve always wondered what they were (I knew in general, but in specific I had no idea).

Recently, a friend contacted me about obtaining crystal for Orgonite Healing Sculptures he has been making, and he sent me one, made specifically for me. He included gemstones with properties specific to my needs as well as special gemstones and a crystal I sent from my personal family of stones. All this prompted me to wonder what Orgone actually is and to find out more in general about this substance called Orgonite. 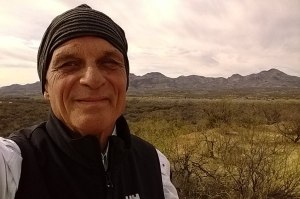 All of the following technical information is from my friend, Rockwell. Because there is a lot of information on the subject of Orgone, much of what you will find in this post is paraphrased from lengthy explanations and all of it has been sifted through the Genn filter for easier understanding.

I submit the caveat here that I am not an expert on Orgone or Orgonite. You can find volumes more information easily in a basic web search and the detailed version of the following conversation will soon be posted on my website. There is also a copy of Rockwell’s business card at the bottom of this post. Feel free to contact him if you would like more information. Following, in question and answer format, is an email conversation about Orgonite I had with my friend, Rockwell. I have paraphrased his answers so this blog post won’t be so long.

Genn: WHAT IS ORGONE?

Rockwell: Austrian born Wilhelm Reich coined the term Orgone in the 1940’s as a “Universal Life Force Energy” not dissimilar to Sanskrit’s ‘Prana’ or the Chinese ‘Chi’ in explaining the connective network of all energy and form.

Orgone exists in healthy and in stagnant forms. For example: healthy Orgone can be found near high mountain peaks, waterfalls, green forests and many other natural environments untouched by pollution. The unhealthy, negative, energies are most always associated with urban environments; phone masts, cell towers, electro-magnetic frequency emitters, electronic devices of all kinds and any disruptive or predatory energies.

G: WHAT IS ORGONITE?

R: Orgonite is a device made from a 50-50 ratio of organic (resins) to inorganic (metals). It also contains at least one quartz crystal, and often additional crystals and gemstones with healing properties. It is used to convert stagnant or negative energy (DOR/Deadly Orgone) into neutralized or positive energy (POR/Positive Orgone).

G: WHAT IS THE BRIEF HISTORY OF ORGONITE and ORGONE GENERATORS?

R: Austrian Wilhelm Reich invented an energy accumulator (an Orgone box) and began experimenting with healing cancer in rats. The government powers of the time, influenced by mainstream psychology experts, had Reich jailed in 1955 for continuing to market his Orgone energy accumulator after persistent warnings to stop. He died incarcerated in 1957. Reichian theories and psychoanalysis techniques have evolved and have continued to this day although under different names especially soon after his death.

Another Austrian, Hans Welz, evolved Reich’s Orgone accumulator by casting resins, metals and quartz crystal in molds (coined Orgonite) for the purposes of neutralizing and transforming electro-magnetic frequencies. Welz furthered the work of Reich, invented Orgonite, continued his research and has since devised generators of Chi, Orgone and Prana, the etheric makeup of the “Universal Life Force Energies”. In 2006, Welz patented the term Orgonite.

Others have enhanced on Welz’s Orgonite creation, including oracle clairvoyant Carol Croft and her husband Don, who helped popularize a worldwide movement of the “gifting” of Orgonite and neutralizing and transforming electro-magnetic radiation as well as building Orgonite “cloudbusters” for breaking down chemtrails. They also produce a line of devices and began adding precious metals and stones to their Orgonite and jewelry designs. Many have joined the “gifting” and making of Orgonite.

G: HOW DOES ORGONITE WORK? 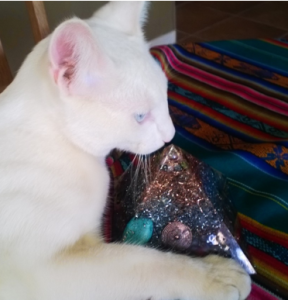 R: The sculptures that my brother Lee and I create require the organic resins to attract and hold Orgone energy and the inorganic metal shavings to initially attract and then immediately repel those same energies. Because of the organic materials’ ability to attract and hold energy as the metals repel it, a back and forth ‘scrubbing’ action takes place, essentially cleansing it and leaving the energy neutral or positive.

We use our Consciousness to interact with the Orgonite and Orgone energy, “mind over matter”, as Orgone is the building block of our material reality. We can use our thoughts and emotions to interact with it and shape the material world in which we live. 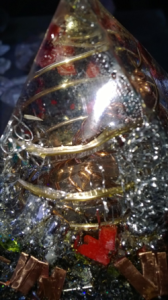 G: WHAT IS IN YOUR ORGONITE SCULPTURES?

R: A quartz crystal is used and is sometimes wrapped in a cubital copper coil with a positive and negative end embedded into the resin and metal matrix. With great intention, the crystals are programmed for their job of emotional cleansing and negative energy clearing. We include precious stones which are assigned more individual tasks.

G: TELL US A LITTLE BIT ABOUT YOURSELF AND HOW YOU CAME TO BE A SCULPTOR OF ORGONITE PYRAMIDS

R: While living on the Pacific coast of Mexico in 2013, I met a world traveler who offered to show me how to make Orgonite. He stressed to me the importance of positive intention in the creation process and using the proper gemstones according to the outcome desired.

It was in this vein that I began casting Orgonite. I asked, in the making of that first sculpture, that I be able to see inside my heart chakra and to connect with my disconnection of mind and spirit. I was excited by how cool that first piece came out. I loved it! I couldn’t stop looking at it.

While taking a siesta in the hammock, I awoke in a dream-like state (an epiphany) with the sculpt resting on my chest. I had an experience which was the start of my passionate search for getting my heart free from its fears of transparency. 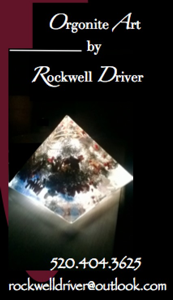 for more information about Orgonite

I have since moved back to the states and have cast over a hundred sculptures. Some of my first thoughts were of blending the science, the metaphysics and mysticism of crystals and precious stones and the Art of making beautiful sculptures with healing potential for a specific person with specific needs.

I have since brought my brother into the equation. He is a builder of amazing furniture, spiral staircases and now, beautiful hard wood bases for our sculptures. They have lighted mirrors, reflecting magically and the stands accentuate our healing Orgonite Pyramid Art. Without his touch, I feel these sculptures are incomplete. We call them “Healing Orgonite Pyramid Art:  A Meditative and Energy Clearing Sculpture.”

We now build sculptures after consulting with the recipient, and provide the intended stones and crystals necessary for balance, redirection and flow of energies for the individual. My brother, Lee, and I will soon will have a page at Arkansas Crystal Works where you can order a healing pyramid sculpture made especially for you.

Thank you, Rock, for that information about Orgonite, in general, and your healing sculptures, specifically!

The sculpture I have lives by my bedside. Before I had it refitted with the wooden base, I would place it on my chest during rest or meditation. Even though the pyramid is quite heavy, the sensation of weight would disappear and the sculpture would seem to blend into my aura. Since moving it to my bedside, I have noticed that my sleep comes much more quickly. I sleep more deeply and have vivid dreams.

The subjects of Orgone and Orgonite have always fascinated me. I hope you have found this brief history and explanation enlightening and informative. Do you have experiences with Orgonite or Orgone Generators? I would love to hear them!