DOUBLE TERMINATED CRYSTAL – energy which flows in both directions

This week we’ll discuss the metaphysical properties of Double Terminated quartz crystals; what they are, how to determine if you have one, and how to work with their unique energy.

We discussed crystal Clusters in an earlier post. We mentioned at that time that there are some crystals which don’t grow on a matrix, they basically grow from a “seed” of silicon dioxide in clay. That is what we’ll discuss in this blog post: Double Terminated crystals.

WHAT ARE DOUBLE TERMINATED CRYSTALS? 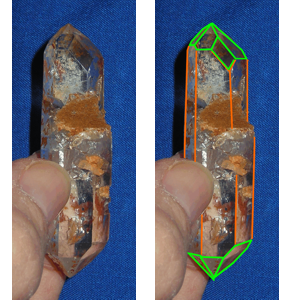 Double Terminated crystals have a termination on both ends.

Sometimes Double Terminated points may almost appear to be in a “ball shape” because the sides are so narrow in relation to the terminations.

Below is a picture of this type of Double Terminated crystal. I have drawn lines to indicate the sides versus the terminations:

As I mentioned earlier, Double Terminated crystals grow from a “seed” molecule of silicon dioxide in clay and grow outward in both directions. They are not formed on a matrix. The energy in these crystals flows in both directions as well.

HOW DOES THE ENERGY FLOW DIFFER?

In single terminated crystals, the energy is directed from the base (bottom) and out the top (termination).

Based on the growth pattern, crystals with two “pointy ends” (Double Terminated crystals) don’t have a base or bottom as such, and the energy may be directed (flows) both ways. 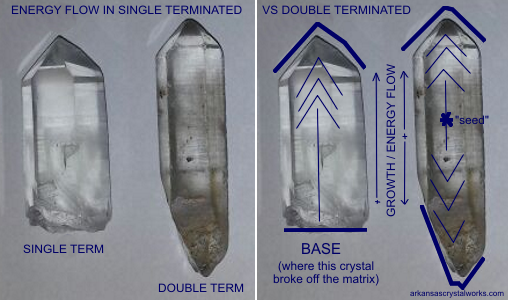 Double Terminated points may occur as single points or they may be clustered or grown together.

As with all crystals, they may also have characteristics other than just being Double Terminated. To revisit some configurations which we have previously discussed, here is a picture of a Double Terminated crystal with Barnacles and one with Bridges: 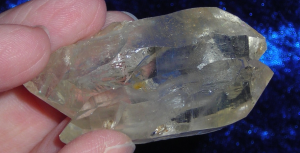 Double Terminated points send as well as receive energy, so they promote psychic ability and dream recall. They are also used for balance.

Double Terminated crystals are useful in any application in which you want the energy to flow in both directions.

I like using them in healing layouts or grids because of the bi-directional energy flow.

In the photo grid example, there are two pink, double ended arrows on the two Double Terminated crystals. The other crystals are single terminated, and the arrows (energy) is directed primarily one way.

Don’t let the arrows and energy direction confuse you, however. All crystals (both single and double terminated) are capable of both sending and receiving (there is no “stop valve” inside which prevents the energy from flowing both ways)… It is just helpful to remember that the energy is most focused or directed in the direction of the terminating end. Meaning x=====> or <===x===>. The differentiating terms would be flow (all crystals allow energy to flow) versus direction (energy may be more easily directed out the terminations).

I hope you have enjoyed this discussion about Double Terminated quartz crystals; what they are, how to determine if you have one, and how to work with them. Next time we’ll discuss Dow or Trans-Channeler quartz crystals.