This week we’ll discuss the metaphysical properties of Channeling or Channeler quartz crystal points; what they are, how to determine if you have one, and how to work with their unique energy. They are referred to as either Channeler OR Channeling, both are correct and are used interchangeably.

Metaphysical description: Channeler quartz crystals help you access higher wisdom, either in the form of your Higher Self or Spirit Guides, or of Angels. These crystals exude a crisp, regal energy. Channeling crystals can bring you love and light from beings in the higher realms.

When would a person choose to work with a Channeling crystal?

As the name and metaphysical description implies, you might work with a Channeling crystal to contact Spirit Guides, Angels or other entities. They have a high vibration, and a focused, connecting energy (think of a “channel” on the television or radio, it connects you to a particular broadcast). A channel when referring to water connects two larger bodies of water to each other. Apply those familiar descriptions of a channel to that of a Channeler quartz crystal and it may help you visualize the energy represented. 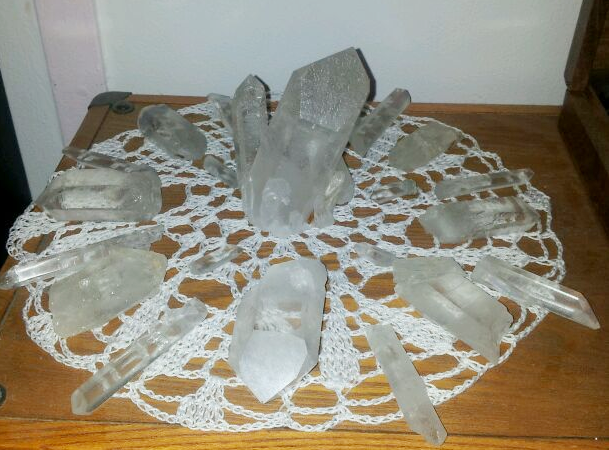 You might create a grid using the Channeling crystals on the cardinal points (North, South, East West) and pointing IN to the center to bring the energies of Spirit Guides or entities IN to you, or pointing OUT of the center if you are reaching OUT to same. In the grid above, I placed Channeling quartz crystal points facing OUT on the cardinal points (N, S, E, W) and facing IN on the intermediate points (NW, NE, SW, SE), and so on. I also placed a large Channeler quartz crystal at the center of the grid to hold the energy.

You can create a small grid which would sit on a tabletop like the one pictured, or cast a large circle and create your grid, inside the circle, on the outer edges, with you in the center, holding a Channeling crystal. The sky is the limit! Obviously the more Channeling quartz crystals you have access to, the better, as your grid (or cast circle) grows in size.

If you only have one Channeler crystal, I would place it in the center of the grid or circle and use other quartz points, programmed to channel, on the outer edge to amplify the energy of the Channeler.

How do you determine if you have a Channeling quartz crystal? Channeling or Channeler crystals are one of the metaphysical configurations determined by counting edges of crystal faces. In order to understand what I mean by this, we need to discuss faces (also called facets) and edges of faces. 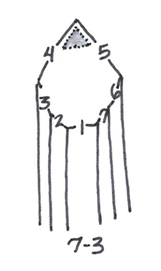 Here is the description I give about Channeler or Channeling crystals in my book Understanding the Crystal People: The termination (point or top of a crystal) is divided into what are called facets or faces. The faces are what make up the pointy end of the crystal.

The largest face of the point is called the “main face” (which is also the front of the crystal).

Beginning with the main face (remember, this is usually the largest one), put your thumb or finger on one of the edges of the face to keep track of where you started or discover the counting method that works best for you and use that one. Keep track of how many edges (sides) each face has. 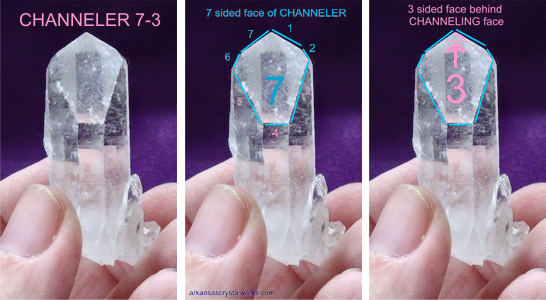 If it is a Channeler quartz crystal, the main face will have seven edges. Directly behind that seven-sided face, there will be a three-sided face (triangle). As I said earlier, this configuration is described as a 7-3. If giving the Channeling crystal a numerically descriptive name seems odd, it is because there is also a 7-3-7, which is a Transmitter, and a 7-3-7-3-7-3, which is a Dow or Trans-Channeler. We’ll discuss each of these fully in later posts. If, when you are counting edges of faces on your crystals at home, you come up with more than one 7-sided face, make note of where you keep that crystal for the upcoming posts on Transmitters and Dow crystals, they are very special. You can also click the following links for brief information on a 7-3-7 (Transmitter) or this link for a 7-3-7-3-7-3 (Dow) if you can’t wait to find out.

As you can see, in most of these pictures I have outlined the area of the crystal to which I am referring as I did with the posts describing Barnacles and Bridges. I made a little skip in the line to show where the edge of each face starts and stops. Look at the crystal without the lines and see if you can count the edges. This will help familiarize you with counting the edges of your crystals at home.  Sometimes, like in the example below, one of the edges is very tiny, so count carefully! 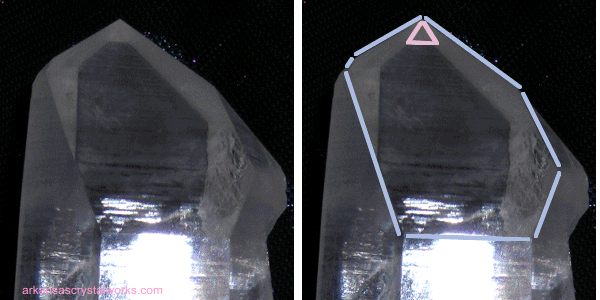 The Channeling face isn’t always symmetrical, as in the crystal pictured above. 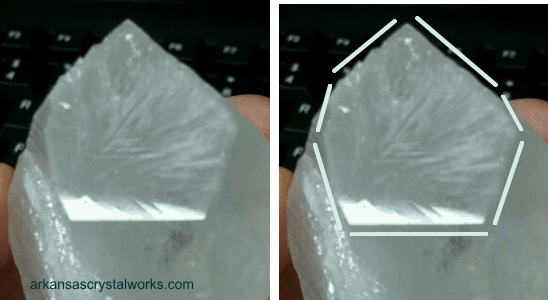 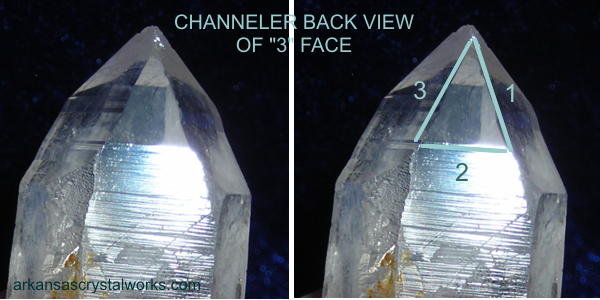 The triangle or three-sided face behind the seven-sided face may be very small, or it may be large as it is in the crystal pictured above. 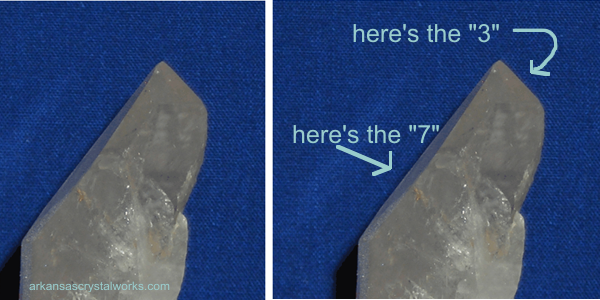 Here’s a side-view of a Channeler or Channeling quartz crystal. 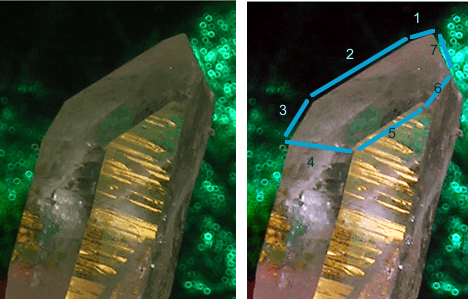 Above is another side-view, this time with the edges of the Channeling face outlined.

Sometimes a crystal will be Empathic (chipped or damaged) but they may still be a Channeler.

You can extrapolate (form an opinion or make an estimate about something from known facts) and count where the sides of the face were before they were lost to the damage. You can still work with these Empathic Channeler crystals even though the entire Channeling face isn’t present.

I hope you have enjoyed this discussion about Channeler or Channeling crystals; what they are, how to determine if you have one, and how to work with them. Next time we’ll discuss quartz crystal Cathedral or Lightbraries.

Here is a link to the store at Arkansas Crystal Works in case you might like to work with a Channeling crystal.