Last time I promised to begin our next discussion with Barnacles. Before I talk about Barnacles specifically, though, let’s talk about how these metaphysical characteristics work. I have been doing a lot of meditating on this, and asked my crystal guide, Venus, for clarity, primarily in how to describe this concept of Metaphysical Descriptions to you. Following is information received from Venus over a period of days, and quoted is where she popped in as I was compiling my thoughts.

While the crystal configurations and shapes which have been named by many are a good way to generally categorize these configurations, it can be misleading, because people may think that if a shape or structure implies this or that (via the name or description), that magically, simply by obtaining one of these specially named crystals, the desired outcome will be achieved.

This is not how it works, however, (much like there is no “magic pill” for things such as weight loss). The work must be done on the person’s part, because within this human experience is built in the concept of free will. We (the Crystal People or your Guides, Angels, etc) are not going to cause these changes without your input and full cooperation. We know this would rob you of the fun of playing the game, which is the reason you incarnated!

Imagine for a moment that a CD of the Encyclopedia Britannica was sent via time travel into the past, prior to the time when there was a way to access the information-a time when there were no personal computers. Some people would deny even the remotest possibility that an entire set of encyclopedias could be on this flat shiny disc. Perhaps some of the people know about records and record players, so they are able to entertain at least the possibility that this could be true. They might read the description on the front, and having heard of the encyclopedia Britannica, and by applying what they know about records and record players, their disbelief might be suspended. However, simply suspending this disbelief doesn’t magically grant access to the information on the disc.

Believing that different crystals can magically produce any given result without proper interaction from the user would be as silly as one of the people from the past strapping the disc to his or her head expecting to access the information on the disc.

So, while it IS true that the different metaphysical descriptions can indeed produce the desired result described, the crystal must first be put into use by the “player” to access the potentiality (the “player” in this case is the person wishing for the desired result). To unlock the “magic” of the crystal requires input from the person. The crystal simply helps arrange the puzzle pieces which are already within the user, then it is up to the user to interpret the picture and rearrange it until it suits the desired outcome.

So, without the CD player, computer or boom box, the information on the CD can’t be accessed. I think that is why so many people who really aren’t “into” metaphysics think that people who ARE appear to be a little nuts. Without applying the METAphysical part of the equation, a non-metaphysical person might assume we think that simply obtaining a certain type of crystal will provide the end result. For example, a Time Link to the Future crystal magically catapulting us into the future or a Soulmate crystal presenting us with Prince or Princess Charming without any effort or interaction on our part (which we understand isn’t the case).

The translation or application of each metaphysical configuration occurs WITHIN the person. Break it down further and the answer is in the description: META (higher, beyond) PHYSICAL (having to do with material things, things which you can touch, etc). The “magic”, if you will, in these crystals, is beyond the physical. It is the translation of the sound wave into music or the words of a poem into emotion.

Hopefully this (semi)-short detour has helped clarify any confusion or questions you may have had about how exactly we expect these different metaphysical properties to apply to how we work with our crystal friends.

Now then, on to BARNACLES!

Here is the description I give about Barnacles in my book Understanding the Crystal People: 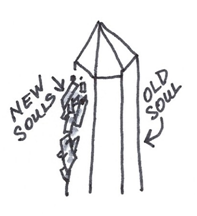 Physical description: Barnacles are smaller crystals that are attached to a larger crystal. I have seen Barnacles called “babies” in some descriptions, but I see babies usually as one or two larger crystals standing at the feet of or attached to a crystal with a parental energy. There might just be a few Barnacles on a point, or they might encrust the point and look like jewels. Usually, these crystals emit a very Old Soul, ancient feeling.

Metaphysical description: The larger crystal is the “Old Soul” and contains the wisdom and trust that attracts the smaller crystals (babies or new souls). I usually find that these Old Soul crystals with Barnacles are helpful to us in the way that a loving human grandmother/father or great grandmother/father would be (imagine the Oracle from the Matrix movies). They help us to see things from a wider, deeper, wiser perspective. I think of the description of a crystal with Barnacles not so much as a description of the Barnacles themselves, but of the energy of the crystal that attracts or grows Barnacles.

Barnacles are one of the metaphysical configurations falling into the category of crystals on crystals. In these first pictures I have circled the Barnacles so you can see which area of the crystal to which I am referring. Here is another: 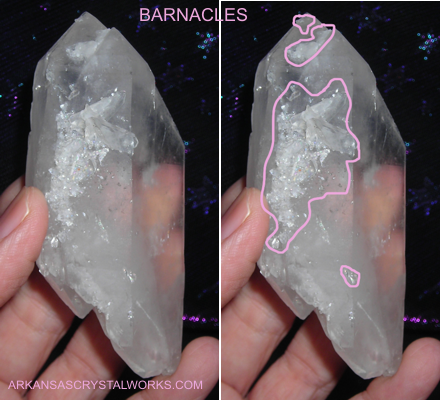 In the case of Barnacles, they are small crystals attached to a larger crystal. They almost appear to be glued on. They aren’t penetrating the larger crystal (in which case, they would be called Bridges or Inner Child crystals).

Barnacles may be large or small (as in the pictures above). They may appear as thick patches or may be scattered intermittently as in the following two examples:

Most often, Barnacles are located on one plane or only half of the crystal (like moss growing on only one side of a tree). Other times they may appear to be scattered on nearly all sides, like on this crystal: 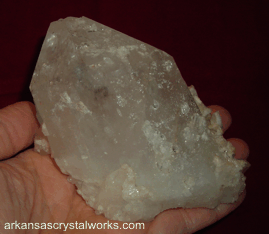 Barnacles are also found on clusters, which may look like this: 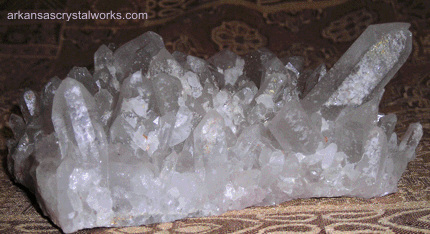 However they are found (small, large, many or few), Barnacles on a crystal will signify to you that the crystal on which they are attached most likely has old soul, ancient energy and probably has knowledge to impart.

I hope you have enjoyed this description of the metaphysical characteristics of Barnacles on quartz crystals. Next time, let’s discuss Bridge or Inner child crystals.

Here is a link to the store at Arkansas Crystal Works in case you might like to work with a crystal with Barnacles.