The question of how quickly we heal from a particular ailment often comes up. There is usually a bigger picture reason and that is that most times ailments are present for the lessons they bring to us. This blog post addresses that “bigger picture”. 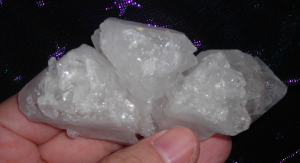 Wow. Look at this crystal. This is an example of Self Healing which occurs during the growth of the crystal. Many times the earth movement causes crystals to break during their growth. I bet it didn’t expect to get all smashed up like that during its growth! However, it didn’t sit down and quit, it just kept on growing. It sealed over the rough, broken edges and in that process attracted some Barnacles (smaller crystals attracted to an old soul crystal) and kept getting prettier and prettier.

The same concept can be applied to us when we find ourselves broken or injured in some way. We heal up our wounds and keep on keepin’ on.

This “bigger picture” is that sometimes (most times) ailments are present for the lessons they bring to us. Our back may ache to remind us we live in our body and we need to stretch it occasionally, to give it a break. We may get the flu or pneumonia to remind us to slow down, and since we didn’t heed earlier requests by our body to do so, it puts the breaks on for us. The reasons diseases manifest are as varied as the people who have them. It is different for everyone. There are some common themes we all share, however. Louise Hay has some excellent advice on how the mind and body connect.

The small lessons are easier to resolve (the backache to remind us to stretch or the flu to remind us to slow down for a longer period). On the very rare occasion the really big lessons seem to conclude quickly and easily (spontaneous remissions, “miracle” healings). Sometimes the lesson takes more than one lifetime to resolve (illnesses which are carried until we leave both the body and the illness behind).

I want to discuss this idea of a “lesson” further. Keep in mind, when I use the word “lesson”, I am referring more to the definition of “message”. “Lesson” can have a negative connotation to some people. For example: “I’ll teach you a lesson” or “you suffer because you won’t learn your lesson”. Viewing the use of the word in this way indicates a reprimand or blame for a negative action rather than a communication between our soul and our body. The word “lesson” in this case means: something from which a person learns. It is not a reproof or punishment. And the word “message” means: to understand or comprehend, especially to infer the correct meaning from circumstances.

So, then, how do we work with this concept of a message or lesson given by our body rather than against it? A good place to start is to separate yourself from the outcome. See if you can find the underlying message rather than ignoring the messenger. You may find that you are successful in ignoring or even killing the messenger but usually there will be another and another until the message is received.

I was given this visual while in meditation the other day: The first messenger is sent to you (again), someone small of stature, meek and unassuming, and politely hands you an envelope for the 5th time. You glance at the messenger, turn away, continue on as before, and the message is left undelivered.

(This first “messenger” may be an ache or pain somewhere, but the ache or pain is pointing to the “bigger picture” message, for example in my case, being on the wrong life path.)

He goes back to the message sender and says, “She ignored me. AGAIN“.

So the next messenger sent out rolls in on a bicycle, a little bigger, a little tougher. She clears her throat loudly and this time, throws the (bigger and heavier) envelope towards you. It bounces off your shin and hits the ground at your feet. You might absentmindedly rub your shin, but again, you shrug and continue on as before, the message left unaccepted.

(This “messenger” may be more severe and persistent pain. You take some Tylenol and don’t look for the underlying reason which is that you hate your job and feel trapped going in this direction.)

The next messenger which is sent out is a big burly brute riding a motorcycle. You hear him roar up, and recoil as he throws the box at you which hits you square in the face. Wincing, you hold your nose, confused at the “sudden” impatience of these messengers, who are now throwing things at you.

(This “messenger” may present as getting some diagnosis of illness xyz, but you don’t look beyond the diagnosis to the underlying reason for the illness… for example again, the message of being on the wrong life path.)

You feel sorry for yourself because you were hit in the face, but still you don’t pick up or read the message.

The final messenger rolls in on a tank and drops the still wrapped message on your head, tied to a ticking bomb.

(Now your illness has become life-threatening. In my case, eventually presenting as cancer. Simply curing this illness will not stop the messengers. Only understanding the underlying message, or lesson, will stop them. For example: I am on the wrong path. I am going to turn around and change the direction in which I am living my life.)

Usually it takes the “tied to a bomb” message for us to look for the deeper reason to try and understand what the real message is. For example, when people get a diagnosis of cancer or emphysema and only then resolve to change their lives.

In the meantime, work on discovering the message or the lesson, and while you do this, offer the messenger rest and refreshment. If he isn’t shaking the message in your face it will make things more pleasant. I know my tendency is to resist the messenger, shove her away, ignore her, shun her. I resist the discomfort, rage at the disease, curse my body, harden against the symptoms or try to pretend they don’t exist. This doesn’t make the messengers (the aches and pains, the illness, etc) go away, it tends to make them more persistent. The messengers’ (the illness, the symptoms’) job is to deliver the message, the underlying reason for the ailment (in the example above, being on the wrong life path) until it is accepted, received and understood.

The trick is to pay attention to the messenger EARLY and accept the message while it is still manageable. Deal with it when it is delivered in an envelope rather than trying to read it and implement the changes required with the time bomb tick tick ticking in your ear.

Make your goal for your healing sessions clear and in manageable steps. Welcome the messengers, thank them for their service and in the meantime, do your best to understand and resolve the underlying message.

Tagged crystal for cancer, crystals, healing crystal, how to. Bookmark the permalink.

8 Responses to Illness as Messenger: Follow-up to Crystal Healing