Crystal Genn » CRYSTALS » HOW I BECAME ADDICTED TO ROCKS: THIS IS MY STORY

HOW I BECAME ADDICTED TO ROCKS: THIS IS MY STORY 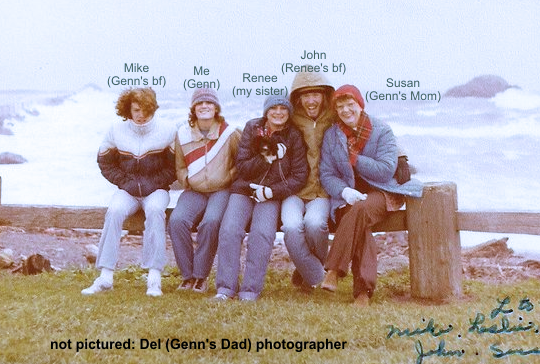 I started picking up rocks with my Granny on our summer vacations to Crescent City, California. We would pick up the agate on the beach. Sometimes we would lay in the pebbles and sift through them, holding them up to the sunlight to see which were most translucent. The top layer, dried by the sun, (which beckoned us to sit and dig) was deceptive. The sea water would seep up from the under layer and soak our knees and elbows. When the agates we found dried, we would lick them to rediscover the shine. 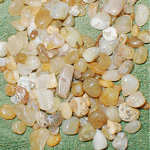 Granny collected patches and buttons from her travels and sewed them on her favorite rock hounding jacket. She would giggle as she pointed out her favorite button (which I still have… somewhere). It says in bold print: “I’m an Agate Licker”… you can imagine the stares she used to get from wearing that one!

My grandparents were both avid rock hunters, members of their local Gem and Mineral society, traveling the United States after their retirement, collecting gemstones of all types and varieties. I can remember how proud I was when they allowed me to tag along on one of the group digs. We were looking for hematite or rhodonite or some other “ite”… I don’t even remember now… It was over 40 years ago (EEK!). Scrambling over logs that crossed rushing creeks, wandering about for hours, having no idea what I was looking for and having the time of my life. I learned my first rock term that day, as I picked up so many of them, asking if it was the particular “ite” we were looking for… “No, that’s a Leaverite”, they would say. “What is Leaverite and why aren’t we picking that up too?”, I asked innocently. Laughing at my having fallen for their inside joke, they would then reveal, “It is a Leaverite because you’re supposed to Leave ‘er right there!” 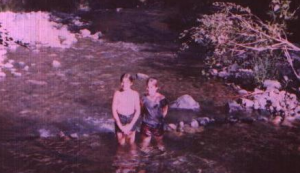 They also dug antique bottles from old home sites. My grandpa used his metal detector to search the edges of the woods for the “scrap pile”, where the previously discarded bottles were to be found. Granny and I would pick up the rusted and bent square nails which were handcrafted so many years ago. What they were going to do with it all was beyond me. It didn’t matter. It was the thrill of the find. It was such an adventure to rumble down old wagon trails, slowly bouncing in and out and around ruts and potholes and rubbing so close to rain-moistened ferns and leaf-covered tree limbs on each side that we had to pull our arms back as they lashed at open windows. 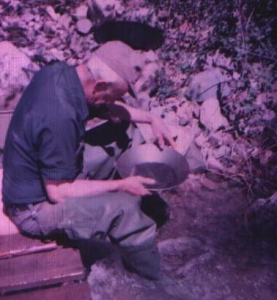 They also had claim to five gold-mining sites in the Trinity National Forest, on Mule Creek. Summers were spent there in the cool-dark woods, knee-deep in the icy cold stream, playing in the summers’ heat and panning for gold. We would shake the dirt off the moss growing under the roots of trees on the creek bank that had been eroded away by high water the previous winter. Squatting in the rocks and pebbles at the waters edge, we would swirl the water over the dirt in our gold pans with the rhythmic swish swish swish, carefully washing away the brown dirt and debris, looking to reveal the black sand where the gold was typically found, and then hoping to find gold, heaviest of all, which would settle to the bottom. 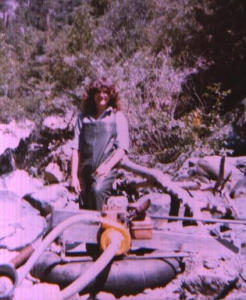 Genn’s sister with the noisy dredge

At the end of the day, we would marvel at the nuggets my Grandpappy would reveal from a long day of dredging from under bedrock in the deep creek holes and beds. This almost made the constant drone of the gas engine seem worth the intrusion into the peaceful green dogwood canopy surroundings. My sister and I would proudly show off our tiny glass jars filled with water and gold specks while we ate hot-dogs and marshmallows beside the campfire.

On the most odd occasion, a black bear would surprise us by making his presence known. My sister and I, straining for a closer look, were quickly shushed into the travel trailer by Granny. At this sudden panic by our grandparents, realizing our peril, my sister and I stood, stock still, breathing shallowly, as if not to alert the bear to our presence, our mouths open and our eyes darting around, watching the bear and waiting for the all clear. I Googled “California black bear Trinity National Forest” below is a picture that was closest to what we saw that day). 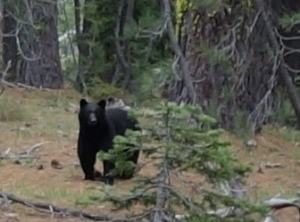 Of course, the bear would amble off, as unaware of us as he was when he appeared from the dark woods. For days, the hiking restriction which was “within eyesight of the camp”, was strictly enforced and to be followed without exception. As kids do, we would slowly push our boundaries as far as we could, until we were pulled back by the reminder of the bears and other dangers lurking about. The feeling of fear easily faded and we would spend weeks hoping for another “sighting”.

I wouldn’t trade the memories of those summers spent rock hounding and gold-digging for anything in the world. They hooked me on minerals and stones like an addict to a drug… enter quartz crystals…

During all this time, the summers that were spent visiting my grandparents in Northern California, I lived on a farm in the Sacramento River Valley, about 2 & 1/2 hours North of Sacramento. In the early eighties, my grandparents partitioned off an acre in our field, where they built a house, so they could be closer to us. They continued their rock hounding, but since Grandpap was now retired from the Forest Service, they were able to travel, and expand their mineral lust beyond the Trinity National Forest to include the entire United States. 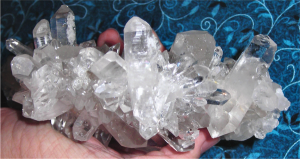 They used to drive from California out to Arkansas and mine for crystal for weeks at a time. They had to ship it back by UPS because there was too much to carry back in their car.

I can still remember the huge clusters and points, laid out on the tables that Grandpappy made in the front yard, rows and rows of them, four feet wide and 20 to 30 feet long. They were more like frames, really, with wire mesh for tops, so the rain would wash through as it cleaned the clay off the crystals. The spikes and shining points glimmered and flashed like diamonds in the hot California sunshine… 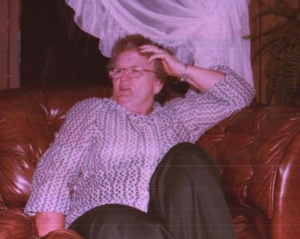 If I wasn’t before, now I was hooked for sure. The thrill of adventure and the anticipation of the unknown is still with me, urging me on every time I pick up a new stone.

Even though it’s been well over 20 years since she made her transition back to Spirit, I will always maintain my connection with my grandmother through my closeness with Mother Earth. I hear her in the breeze when I walk along the beach. I feel her every time I bend over to pick up a stone. I see her every time I hold an agate up to the sun.

Thanks for sharing my journey! Was there something special that “sparked” your journey into the mineral kingdom!? Share!

8 Responses to HOW I BECAME ADDICTED TO ROCKS: THIS IS MY STORY