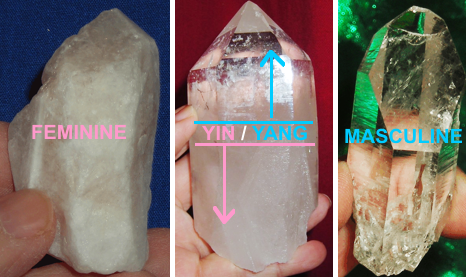 We’ll start with the physical description of FEMININE crystals:

Here is a picture with some examples of Feminine crystals. Notice how densely white (milky) they are:

Moving on from feminine to masculine, very clear points are called Masculine. They may be optically clear, or they may have some Fairy Frost. The base of a Masculine crystal may be dense with frost, however if more of the point is clear than cloudy, it is described as Masculine.

Here is a picture with some examples of Masculine crystals. Notice how clear they are:

Most crystals are part Feminine and part Masculine, a little bit more of one than the other, but not fully either. These would be described as “mostly Feminine” or “mostly Masculine”. Here’s an example of that:

Some crystals are an equal mix of both Feminine and Masculine, these crystals are called Yin/Yang. Lots of crystals are dense at the base but are more Masculine than Feminine, so these aren’t normally called Yin/Yang. There are also crystals which would be described as a mix of masculine and feminine top to bottom (meaning an even distribution of clarity and milkiness throughout. This type isn’t normally called yin/yang either. I typically call a crystal Yin/Yang if it is as close to 50/50 as possible (top half masculine/bottom half feminine), or sometimes 40/60 either way as long as there is a really strong area of demarcation where the masculine and feminine meet.

Here is a picture with some examples of Yin/Yang crystals. Notice how clear they are at the top and how milky they are at the bottom and that there is an obvious area where the two meet: 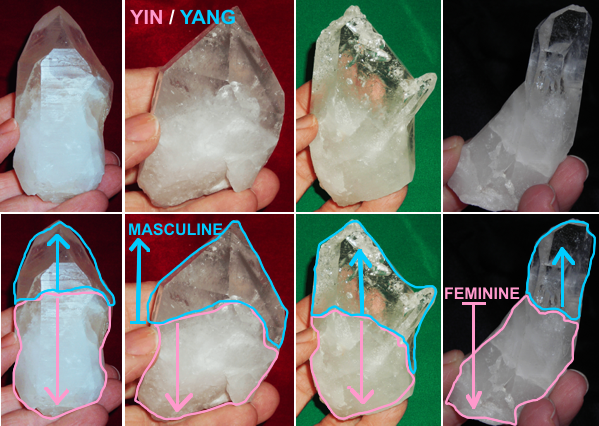 Basically that’s it for the anatomy lesson.

Yin/Yang = half cloudy and half clear.

Now, let’s talk briefly about these terms energetically. Whether or not a crystal presents as feminine, masculine or yin/yang physically, energetically speaking, here is what you might expect from them:

Feminine crystals help us (both men and women) to get in touch with our feminine nature. They have a soft, yet deep, mysterious energy. Yin in nature, Feminine crystals are intuitive, nurturing and receptive. The energy is more diffuse. If the energy were compared to a light, it would be described as glowing (coming from all directions evenly).

Knowing that Yin/Yang crystals have an equal measure of masculine to feminine energy, they are good for attaining and maintaining balance.

Today we learned that:

I hope you have enjoyed this discussion about the anatomy of Feminine, Masculine and Yin/Yang quartz crystals. Next week we’ll discuss Generator or Merlin quartz crystals.

DRUSY (To assist with ideas or thought forms ready to spring forth and grow such as thoughts or dreams, desires or wishes.) purchase DRUSY    read blog post

DOW or TRANS-CHANNELER CRYSTALS (For divine balance, and a connection with the self and Universal Truth.) Note: Dow crystals are rare, and I don’t always have very many of them. Sometimes the ones I have are Dow by count (7-3-7-3-7-3) but have one large 7-sided face (present as a Channeler) or two large 7-sided faces and one small 7 (present as a Transmitter). If you order one, I will let you know at time of purchase what I have available.  purchase DOW or TRANS-CHANNELER crystal     read blog post

DOLPHIN CRYSTAL (To encourage teaching in a loving, fun, joyful way, or alternately, to assist one to enjoy learning) read blog post

See you next week for Generator or Merlin quartz crystals.