Extraterrestrial crystals have a single termination at the top and the base has several terminations. This is why they remind me of a rocket ship. Remember when we discussed Drusy versus Barnacles? Remember that visually, Barnacles are the small points attracted to a larger point and Drusy looks like a tiny version of these. Well, E.T. crystals could be compared in the same way to Self Healed crystals (which we haven’t covered yet, since we are only in the E’s). However, here’s a picture of Self Healing in beginning (#1) and more advanced stages (#2). The E.T. crystal is #3; see how it is comparable? 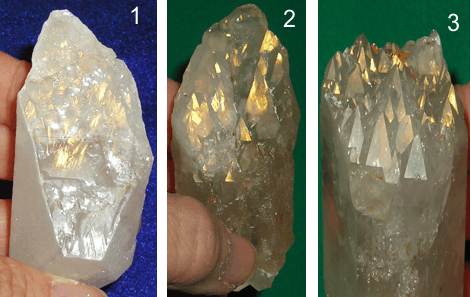 Now, I’m not proposing that EVERY Self Healed crystal is just an E.T. crystal in an earlier stage (because they aren’t), but SOME of them are similar. See how the #3 crystal has what appear to be a bunch of terminations on this end? That’s what makes it an E.T. versus simply being Self Healed.

Here’s a good example of an E.T. crystal which is part E.T. and part Self Healed. The E.T. part is the DARK BLUE, the Self Healed part is light blue. I would also say that any of the really pointy triangle parts what I didn’t put in Dark blue for you would also classify as E.T. I think if you look at the crystal without the drawing on it, you can tell which part is the E.T. part, and which is the Self Healed part. Even though part of this crystal is E.T. and part is Self Healed, it would still be called an E.T. crystal. If I were posting it to the webpage for adoption, I would say “this is a Self Healed E.T. crystal”. To be clear, the entire crystal is called E.T. not just the points on the bottom. The terminations on the base are what make the whole crystal an Extra Terrestrial.

Here are some more pictures. Remember when I compared Drusy and Barnacles a little bit earlier? Here is a picture of an E.T. crystal with both: 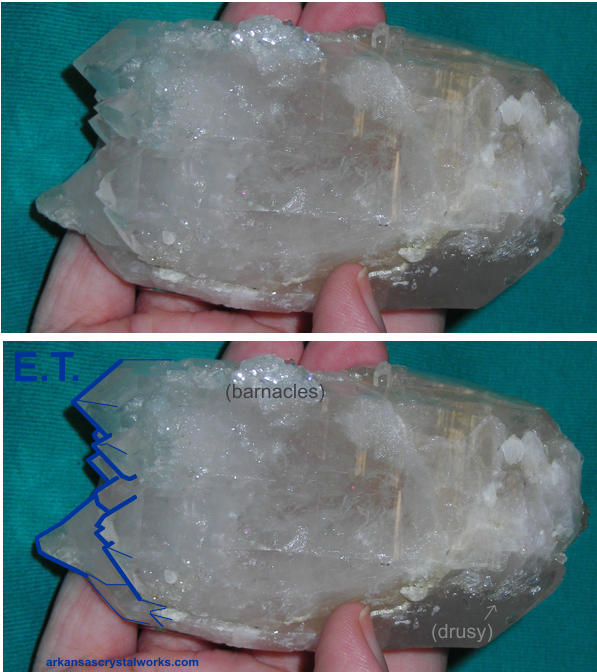 Look at those terminations which I outlined in dark blue. Do you feel the zoom-zoom energy? (Rocketship.)

The next E.T. crystal has more rounded terminations (not so pointy as the ones we have seen previously), yet it is still an E.T. I find this crystal type interesting, because if you look at the top termination, it is kind of squared off, and the terminations on the base are squared off as well (which is what makes them appear rounded). Crystals are so cool.

The following E.T. crystal has a Bridge and an Inner Child. See how a crystal may have several layers of shapes, configurations and meanings? 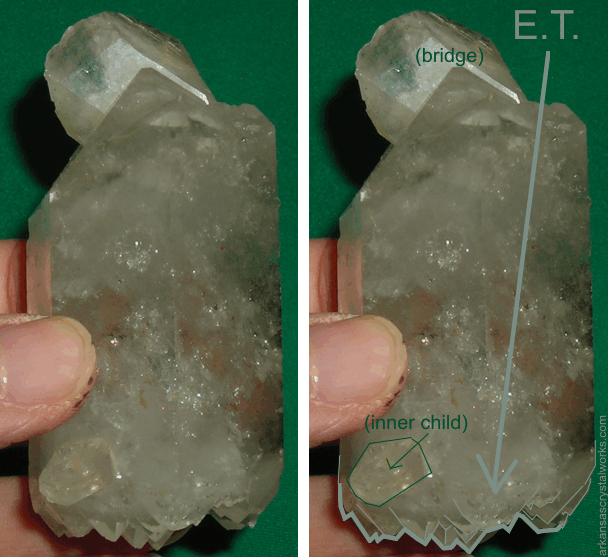 The extra terminations on the next E.T. crystal are more sloped like the Self Healed crystals from the image of the #1, 2 and 3 crystals above: 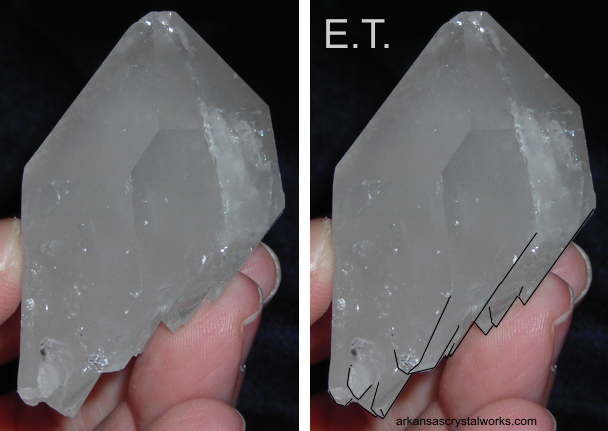 The following E.T. crystal has two terminations at the top because it is a Twin or Soulmate crystal (two similarly sized crystals attached side-by-side):

Up next is another E.T. crystal with a large Bridge. On looking at this further, I would classify this crystal as a Dolphin, rather than a Bridge. The reason is that the crystal which I labeled as “Bridge” also has extra terminations and it is “riding” along side the main crystal, in the same direction. Bridges tend to poke into or out of. This is more parallel. 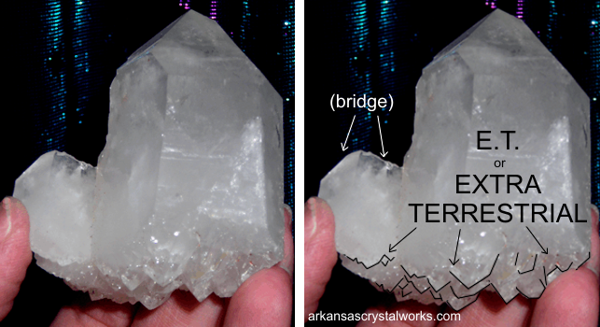 This may seem a little confusing at first, but here is a good example of when a name applies to only a portion of the crystal or the whole crystal. For example: If this pokey-outie crystal were a Bridge (as I labelled it), you would be referring ONLY to the pokey outie (smaller) crystal. If the pokey outie crystal is a DOLPHIN (which it is) then the name is referring to the ENTIRE crystal (baby and mother). (Just like an E.T. crystal is the entire crystal, not just the extra terminations.)

The following crystal is a Dolphin E.T. crystal which is easier to identify than the one above. See how the smaller crystal is “riding” in the same direction as the larger, and the bottom of the “baby” is also an E.T.? On the left I outlined what makes it a Dolphin crystal, and on the right, what makes it an E.T., Extra Terrestrial or Extra Termination crystal: 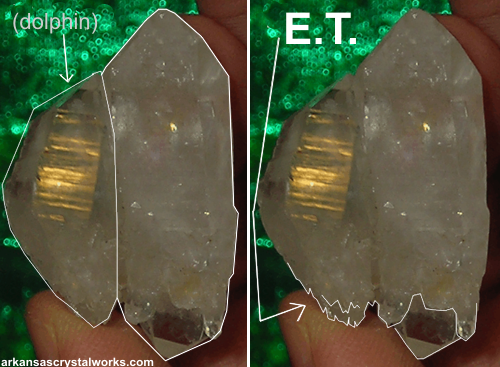 I hope this hasn’t been too confusing. The more you practice and encounter, the easier it gets. I promise!

So now that we know what an E.T., Extra Terrestrial or Extra Termination crystal IS when we see one, how do we work with them?

As I mentioned earlier, E.T. crystals have a powerful energy. When you hold one, you can feel the special power. Even though E.T. crystals have extra terminations at the base, (similar to a Double Terminated crystal, which as you recall, has energy flow in both directions like a double ended arrow), the energy in E.T.’s goes OUT through the top very powerfully (that’s another reason why I imagine the base as rocket boosters).

You may work with ET crystals to assist you in accessing beings from other realities (extraterrestrials and/or Angels). You may also work with them as powerful healing crystals, directing the energy with great force (such as over long distances).

I hope you have enjoyed this discussion about E.T. (Extra Terrestrial or Extra Termination) quartz crystals; what they are, how to determine if you have one, and how to work with them. Next time we’ll discuss Faden quartz crystals.

DRUSY (To assist with ideas or thought forms ready to spring forth and grow such as thoughts or dreams, desires or wishes.) purchase DRUSY    read blog post

DOW or TRANS-CHANNELER CRYSTALS (For divine balance, and a connection with the self and Universal Truth.) Note: Dow crystals are rare, and I don’t always have very many of them. Sometimes the ones I have are Dow by count (7-3-7-3-7-3) but have one large 7-sided face (present as a Channeler) or two large 7-sided faces and one small 7 (present as a Transmitter). If you order one, I will let you know at time of purchase what I have available.  purchase DOW or TRANS-CHANNELER crystal     read blog post

DOLPHIN CRYSTAL (To encourage teaching in a loving, fun, joyful way, or alternately, to assist one to enjoy learning) read blog post

See you next week for Faden quartz crystals.