DIGGING QUARTZ CRYSTAL IN ARKANSAS 1 of 6: “Mining” vs “Digging” 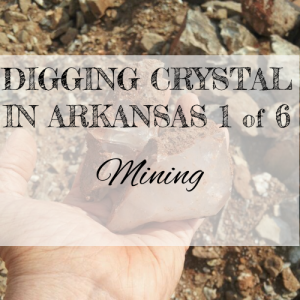 Last blog post we talked about where to dig crystal in Arkansas, in this post I was planning to cover how to dig. It’s a MUCH bigger subject than it seems like it might be, so I am breaking it into several parts. Let’s start with the actual crystal mining process and we’ll cover what the difference is in “mining” and “digging”.

Crystals emerge from the earth in two ways; either they are dug out by people, or they surface on their own through natural causes such as folding, faulting and erosion. By comparison, when we dig them out, they are “born” via C-Section (versus erosion, which would be comparable to natural delivery). There is often controversy about whether we should be bringing the crystals out of the Earth or leaving them there. I have been guided to understand that Mother Earth and the Crystal People know how much humanity needs their assistance going into this new era, so they’re allowing us to deliver them by C-Section. To wait for the crystal to emerge on the Earth’s time scale, we probably would have destroyed ourselves three or four times over, so that by the time they made their way out into the sunshine, we’d have already been toast. Mother Earth and the Crystal People are graciously, and intentionally, allowing us to cut open and dig in to pull them out now, while there’s still time to save humanity.

Let’s get back to the process. How do the commercial miners know where to begin digging? In the mines that are already established, they follow the veins and lay of the land; then, depending on the makeup of the ground, and by following clues, they can make an educated guess about where to go next. Arkansas crystal grows on a matrix in the lining of these crevasses, cracks, and holes in sandstone and shale, so the miners follow the veins. 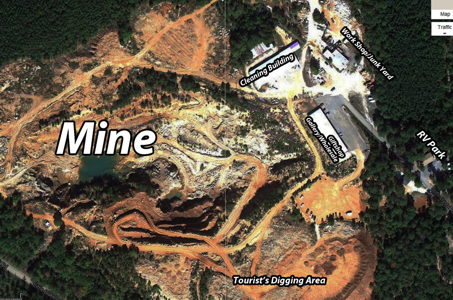 You might wonder what an Arkansas quartz crystal mine looks like. I had visions of holes and darkness and large caves full of crystal, something like a dragon’s lair in the bottom of a big mountain filled with glistening crystal points. What the crystal mines in Arkansas actually look like is a bunch of red dirt on a mountain top. It is a big hole with a road for driving Earth moving equipment in and out. If the mine is big enough, the road may circle down into the hole (also called the pit). There are big piles of dirt all around the top of this hole, or pit, and trees surround the hole. It doesn’t sound very glamorous, I know. I apologize. I like the dragon’s lair image better, too; however, you are on the mountaintop, so you can see for miles and miles in every direction, so the mine is not without its own kind of beauty. There are beautiful green trees and rolling hills. The colors in the fall are stunning. It is breathtaking. I could sit on a rock and stare out for hours (or until my rear end goes numb or another crystal beckons, which doesn’t usually take more than a few minutes).

Mining typically consists of searching where to dig based on clues given by the strata of the rock, at times blasting with dynamite and then carefully digging out the crystal. The blasting is only done to take away large chunks of rock that can’t be dug out with a machine, and it is a very precise skill. The miners find a good vein and the crystal is harvested by the people who run the mine. This is the actual crystal mining. The material that they have blasted, the piles of dirt that they dig out of the way to get to the large veins, is trucked up to the top of the pit and dumped out for people like you and me to dig through.  These piles of dirt are called the tailings, and this is what is described as digging.

There is a lot involved in the process of mining and retrieval of the crystals. Mining is messy, difficult work; it is also careful work. We have discussed how the mining process compares to birth by C-section. So, too, is it comparable both in the way the babies must be carefully extracted (a cut too deep would not be good for the baby) as well as the relationship to what is termed collateral damage. Mother Earth is left with scars from the birth process. Trees are sacrificed, and from an aerial view you can locate the mine by seeing a large red scar in the canopy. In human years, it seems like we have been destructive and careless and Mother Earth has been slashed and scarred forever. However, in Mother Earth years, this scar will heal over and disappear, much like a woman’s scar after a C-section. There will be changes in her body, yes, but given time, the scarring fades and is barely noticeable. In fact, if a human woman’s lifespan was as long as Mother Earth’s in relation, the scar would not be noticeable at all. 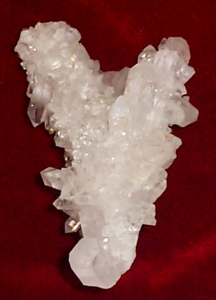 Our great Mother is giving birth to Children of Light who have been incubating for millennia. The time has come for them to emerge and assist us into this new era. I’m so grateful to the Crystal People and to our great Mother for this honor. We don’t want to waste it.

Our role as humans is to help the crystal out of the earth, to be their legs, to get them to where they need to go in order to reach as many people as possible and increase the vibration of all humankind. We are the transport for them to reach as many places, and people, as we can so they may spread their healing and knowledge and general awesomeness. The crystals weren’t “blessed” with legs. (I don’t know if that would be a blessing or a curse if they had been. The visual in my mind of crystals running around the place on legs makes me giggle!) On a more serious note, however, they do need our assistance to get to where they need to go so that they can do the most good. This is what I mean about it being time for their birth and delivery. In keeping, our role as Lightworkers is vital.

Crystal has been commercially mined since the early 1900’s, but the popularity is increasing exponentially as the vibrations increase into this new era. Their light is needed and we can help. How cool is that? Small or large, all crystals need a home.

In the next blog post, we’ll go over a general description of what digging crystal is and in subsequent posts we will cover in more detail, when, what, and how. See you next time!

2 Responses to DIGGING QUARTZ CRYSTAL IN ARKANSAS 1 of 6: “Mining” vs “Digging”