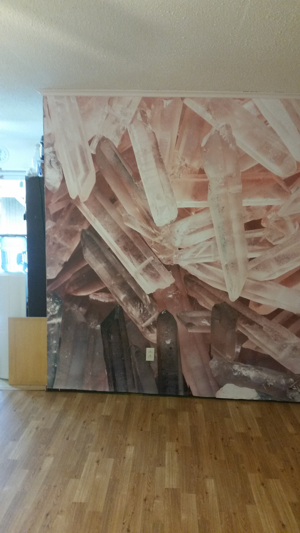 Hello again! This is the last of a two part ‘series’ on a crystal mural we recently hung in our home. If you missed part one (the hanging process) you can read that here.

In this post I want to talk a bit about the wallpaper pattern I chose and why I chose it.

Venus (my Crystal Guide) also will weigh in on the benefits of pictures of crystals such as this mural.

As I said in the last post, I was approached by Anna Fell of Murals Wallpaper about some crystal murals she has. I took a look at all the different styles she had to offer and I fell in love with this one (pictured left). It is called “Rose Crystal Wallpaper”, but for those of you in the know, these are actually Lemurian Seed Crystals. 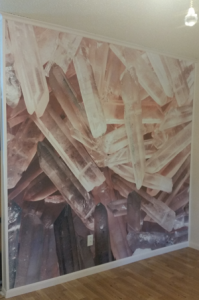 Though many of the crystals pictured are, all of the crystals aren’t Laser Wands like we have come to expect of most Lemurian Seed Crystals we see, but there are other clues leading us to that conclusion. Some of the clues are: the light pinkish coloring is typical of some Brazilian Lemurian Seed crystals, they also have the striations (Lineation), there are some Laser Wands (wider at the base and narrower at the point) and they also have the kind of sand-blasted look typical of Lemurian Seed Crystals.

As an added bonus, some of the crystals pictured are Smoky (Smoky crystals are good for grounding), and simply aesthetically speaking, the smoke color pulls the pink down a bit, keeping it from being too foo-foo. Other features to note, there is also a nice Window on one of them, there is a Twin or Soulmate, a Generator or Merlin, lots of Fairy Frost and some Barnacles.

This is definitely an aside, but I get questions about “seed crystals” often (particularly Lemurian Seed Crystals), and very recently have had several questions about them. Here’s a very recent example of a question that prompted this discussion, followed by my response:

Question: “Since Arkansas was one of the seed places for the Lemurian, Atlantean crystals, have you ever mined any Lemurian crystals and have any for sale?”

My Answer: “From what I understand from reading and studying over the years, the crystals typically referred to as “Lemurian” Seed crystals are found in Brazil, and were given this name according to the crystals found in a certain area there (that have a certain look, structure, etc)… That being said, I suppose one could TECHNICALLY say many of the crystals found (all over the world, and Arkansas specifically) are “seed” crystals (crystals which were seeded). 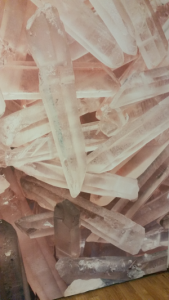 That’s sort of a tangent and not really on topic for this post about the mural, but it came to mind and now’s as good a time as any to share that tidbit. There will be an upcoming post further exploring the topic of Lemurian Seed Crystals. Stay tuned!

At any rate, regarding the mural and crystal types, what does all this mean? Well, bottom line, (Venus enters my consciousness and answers the question)…

…the TYPE of crystal presented isn’t as important as the ability for you (and others viewing the mural) to access the energy of the crystals. Do they resonate? Do they add a pleasing aesthetic to the space? As we know, it isn’t necessary to connect with a crystal only by holding it physically. Just as you are able to connect with a person, the energy of a person, through a photograph, you can also connect to the Crystal Kingdom through a photograph. Imagine the crystals on Genn’s website, there are some that resonate with you immediately and you know you have a heart connection before you even “meet” in person. It can be the same with a mural such as the one dears Genn and Patti installed and of which we are speaking. The energy of the crystal is there to access. We are not static, or ‘stuck’ in a crystalline body as it were. We are energy, light and formless. Our crystal bodies give us a way to work with you in this 3-D space/time continuum. But we also work with you in Spirit, in Energy, in Formlessness. We are accessible to you at all times and in all ways. It is beautiful to utilize something such as a large image of our crystalline forms (bodies) to help you to connect to us in a non 3-D, non linear way.

So! That was fun! Thank you, Venus!

It’s what we know innately. That images speak to us. They have the ability to pluck our emotions and stir our souls. To evoke emotions and raise vibrations. So why not select an image which feeds your soul, and what better way to feed your soul than with a whole WALL of crystal!?

I hope you have enjoyed reading about the journey of hanging this new mural as much as I have enjoyed the process (and the outcome)! A big thank you to Anna Fell of Murals Wallpaper for this lovely mural, thanks to Venus for weighing in with her thoughts, big thanks to my partner Patti for helping me to transform our new home and thank you for sharing the experience with us!

Maybe after reading this you will want a beautiful crystal mural of your own! Stay tuned for a discussion on Lemurian Seed Crystals and more all about crystals. I welcome your input and comments.

Tagged crystals, how to. Bookmark the permalink.