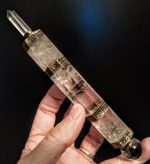 Why do cloudy crystals turn clear? First let’s revisit Fairy Frost. What is the cloudy stuff? Tiny air bubbles and sometimes moisture that is trapped in the crystal when it grew. It is called Fairy Frost. Fairy Frost looks like “fog” or “clouds” wisping inside the body of the crystal. This is the “stuff” that is fading to clear upon wearing or after lots of active use of the crystal (meditation, energy work), etc. A crystal →

Last blog post we discussed Feminine quartz crystals, today we’re going to revisit Masculine quartz crystals. As with our discussion of Feminine crystals, we’re talking about what a “Masculine” quartz crystal looks like. In this first part, we’re discussing whether a crystal is called Masculine by features only, not by energy. In the past I have called this an “anatomy lesson” because basically we’ll be discussing whether a crystal presents physically what has been described as Masculine. (In the next →