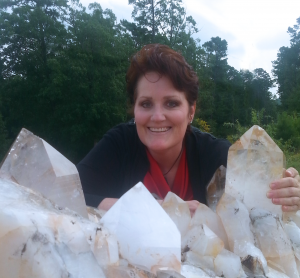 Genn John with The Crystal People

I grew up in California, the granddaughter of rock hounds. I’ve always loved rocks in general but crystals in particular. Beauty is obvious when you look at a crystal. They are sparkly, shiny and gorgeous gemstones. However, initially it didn’t occur to me that they might have life. That they might contain an internal spark as well as the external one I saw. I’m not just talking about a spark as in electricity (which they also have) but a spark of intelligence, of life. Perhaps not life as we usually describe it, but life, none-the-less.

In a story a bit too long to get into here, about 20 years ago I was re-introduced to crystal after going through chemotherapy and radiation for cancer. I started using the crystal in conjunction with my treatment and learned about its incredible healing power. Since I was living in Arkansas (one of only three places in the WORLD with enough crystal to warrant mining), I started digging my own crystal. I did it for recreation initially and continued because it became an undeniable addiction. There is nothing quite like digging for your own crystal, but we’ll discuss that in detail at another time.

Because the crystal had become such a huge part of my life, I began a website. I have been adopting out crystal online since 1995. Why do I say adopting out and not “selling”? I have never felt that crystal is something I am selling, (which implies ownership) but rather that I am helping it get to where it needs to go. My role has been to act as the legs for the crystal; in other words, matching the crystal to its new home and then helping it to get there. Recently I have been guided to become their voice as well. I recently finished writing a book titled Understanding The Crystal People: A Handbook for Lightworkers. I will also be sharing the crystals’ voice here in this blog.

Thanks for spending some time with me here, learning how to connect with The Crystal People!

14 Responses to About Genn